The Irish Sex Work Research Network (ISWRN) is a platform for those interested in sex work and sexual governance scholarship within the island of Ireland. 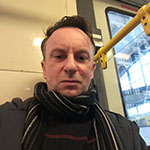 Professor Graham Ellison is a criminologist with a primary interest in the policing and regulation of commercial sex. He has conducted research on both male and female sex workers in a number jurisdictions (Republic of Ireland, Northern Ireland, Germany, Czech Republic and England). His current research interests include the intersection of radical feminist and conservative religious discourses around ‘prostitution’ that stem from the Christian Right. Both for example, reject female bodily autonomy and completely ignore the existence of male and trans sex work. Such alliances have been common in the US historically but are increasingly making headway into Europe and can be seen both in Northern Ireland and England. Other aspects of his research focus on the dynamics of commercial sex in periods of heightened political tension such as the extreme form socio-political conflict that erupted in Northern Ireland. This had a hugely disruptive effect on the nature of sex markets, raising interesting questions about how such markets evolve during periods of political transition.